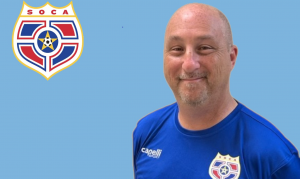 The Soccer Organization of the Charlottesville Area has hired Philip Silverman as the club’s Director of Coaching in charge of National Premier League travel teams. Philip will direct the NPL level of SOCA’s Travel Program, managing 15 teams, U11-U19, boys and girls, in the newly formed NPL West travel league. In addition to his role as Director of Coaching, Philip will serve as head coach for the 2012 and 2010 SOCA Boys White teams in Fall 2022.

Silverman comes to SOCA by way of Baton Rouge, Louisiana, where in addition to coaching soccer he was a long time middle and high school math teacher. Most recently he was the head coach of the St. Michael the Archangel High School Girls Soccer team for the past four years and led them to multiple state final four appearances. Silverman served eight years as an ODP Head Coach in Louisiana and has coached at the ODP, high school and club levels. His varied soccer background includes stints as a Director of Coaching and Board President of youth clubs in Louisiana in addition to experience directing tournaments and managing adult leagues. Silverman is also a Grade 7 referee and certified referee assignor and assessor who was selected to referee at the ODP Region III event. He holds the USSF National C and Youth Licenses in addition to the USC Advanced National Diploma.

SOCA’s White and Red teams will compete in the National Premier Soccer League in Fall 2022. The NPL is a program of the Virginia Premier Soccer League and US Club Soccer. SOCA is one of the founding members of the new western division that will host the strongest clubs in central and western VA including Augusta United (Waynesboro/Staunton), Central Virginia United (Lynchburg), Shenandoah Valley United (Harrisonburg), Culpeper Soccer Club, Fredericksburg Soccer Club, Valley United (Roanoke) and Dynamo (Richmond). Those clubs are joined by more local associations in communities such as Fluvanna, Orange, Greene, Nelson, Madison, Louisa and Shenandoah to round out the league.  Champions of Premier flights advance to State and National NPL Championships.

You may welcome Philip to his new position at his email address: Philip.Silverman@SOCAspot.org.

New SOCA NPL Director of Coaching, Philip Silverman said:
“I am new to the Charlottesville area and look forward to joining SOCA and getting to know our players. I am eager to share my passion and knowledge for the game with SOCA families and help each player move along their pathway to the best of their ability. I am excited to get started this fall.”

Executive Director of the Virginia Soccer Alliance, Matt Wilson said:
“Philip brings a wealth of experience to SOCA as a teacher, coach and administrator. He has engaged with the sport and youth in a variety of ways that will serve him well in his job as Director of Coaching for SOCA. I’m excited to have Phil on board and know the players and families will enjoy getting to know him and benefit from his coaching.”